Persian rugs are the most desired and collected rugs in the world.  Everyone talks about the intricacies and designs like bottles of wine.  And like wine, there is something for each individual’s personal taste.

But where do you learn about them if you’re a newcomer?  We will teach you the basics.  You will even learn some interesting background that will make you sound like the most educated of connoisseurs.

OLDEST KNOWN RUG IN THE WORLD

The weaving of Persian Rugs began in the ancient Persian Empire of Cyrus and Darius the Great.  Historians have established the Pazyryk Carpet as the oldest known knotted-pile rug in existence.  Found in the “frozen tombs” of the nomadic Scythians in modern day Siberia, it contains figurative depictions and ornamental designs resembling those found in the Royal Persian Palace at Persepolis.  Scholars concluded merchants imported it through early nomadic trading. 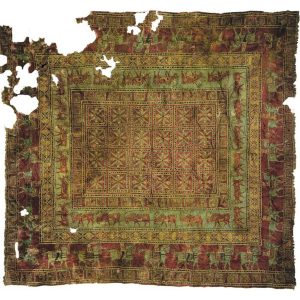 The Pazyryk Carpet, the oldest intact rug in the world dating from the 4th century BC, is approximately 2400 years old.

Persian rugs became established in four distinct styles or traditions through the centuries. 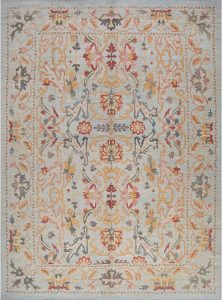 Tribal Tradition – Tribal rugs have become greatly prized for their rustic simplicity, inventiveness through use of geometric patterns, and the mastery of balance and harmony which blend perfectly in today’s modern settings.

Village Tradition – Village rugs refer to those woven locally as a cottage industry.  People used these rugs regionally or sold them to a slightly wider market.  These pieces combine industrial ingenuity with the artful expression of tribal rugs.

Town Tradition – Rugs in the town tradition offer a highly versatile combination of formality and playfulness which appeals to the modern connoisseur.

City Tradition – The most refined of Persian rugs, these elegant pieces are woven in the workshops of master rug designers. One such designer is the world renowned Hadji Jallili (Haji Jalili) in the city of Tabriz.

HOW ARE PERSIAN RUGS NAMED?

Each city and region has its own distinct style of weaving and combination of characters and design elements.  These designs are easily distinguishable to educated rug lovers.  It can take a lot of experience to discern the subtleties of design that identify and differentiate many rugs. 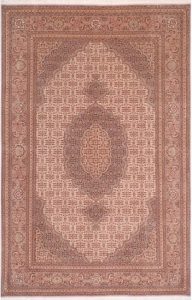 Then you can apply a renowned artist or production company distinction in the same manner:

Often, other countries like India and China make rugs in the style of a Persian Tabriz rugs.  Reputable rug companies name their rugs accordingly:

Reputable dealers state a rug’s origin openly.  Be wary of anyone who will not tell you where the rug is made.  As with any purchase, you you want to know exactly what you’re buying.

FROM PERSIA WITH LOVE

Persian Rugs reflect the most elevated of rug weaving techniques.  The tradition was born and perfected in Persia (modern-day Iran) and then spread throughout the world.  Collectors quickly realized the quality with which the Persians produced their masterpieces.  As a result, distribution companies such as Ziegler & Co set up production facilities and flooded the world market with their designs.

In the Muslim world, it is forbidden for man to create images and characters because God is the only creator in the universe.  So artists came up with interpretations of animals.  For example, the Fish design rug above gives the illusion of the scales on a fish.  The challenges surrounding their desire to create not only supported but also encouraged artistic ingenuity.  As a result, Persian artists were famed for their artistry, and their stunning rugs became the most desired in the world.

Ultimately, everyone loves to view a beautiful work of art.  We especially love ones that stops us in our tracks — like the many styles of Persian Rugs available for your viewing pleasure at the RenCollection showroom and on the web site.

Want to know more? Email us at info@Rencollection.com, call us at (214) 698-1000, or come and visit us at our RenCollection Rugs showroom. We are here to help.

Persian Rugs vs. Oriental Rugs — What is the Difference?

How to Buy Quality Vintage Rugs

How to Buy Area Rugs In Dallas DFW